Long-Eared Owl – The First Coin in a New Wildlife in the Moonlight Series! 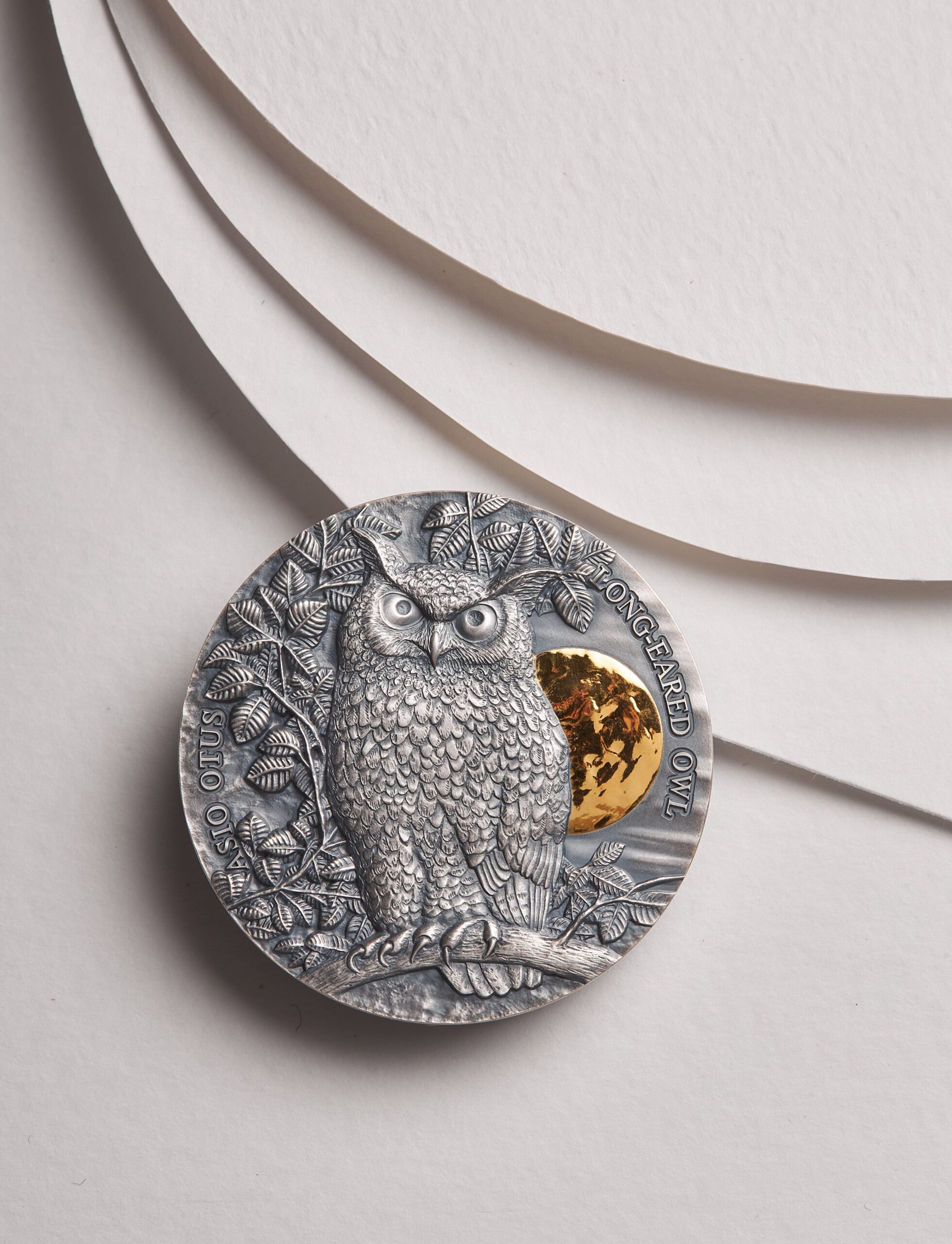 Let us introduce you to a new coin of our production – Long-Eared Owl. This coin is the first one in the series that is called «Wildlife in the Moonlight». It is notable for its impressive ultra-high relief, but we’ll talk about it later.

First, a little bit of information about the owl. Long-Eared Owl (or from Latin Asio otus) is a slender European owl. It can be seen commonly in coniferous forests or dense woodland in Europe, Asia, North America and some parts of Africa. This night bird has long ear tufts that make it so distinctive. Long-Eared Owl is wise and regal, has an imposing stare and elusive nature. Thanks to a specific structure of their flight feathers, these owls can glide slowly and nearly inaudibly, which in combination with perfect hearing makes these birds skillful hunters. By the way, an interesting fact about this owl – the long-eared owl’s ear tufts (large head feathers) become raised when it is alarmed.

As it was said before, the given coin features the ultra-high relief strike for imparting a fine sense of depth. In combination with the high level of detail, it perfectly represents this nocturnal bird in its natural habitat. It can be seen with the naked eye that the moon is perfectly gilded that makes the overall look of the coin beautifully done. The obverse is simple and made in a standard Niue affair.

As for the symbolism, the owl has different symbolic meanings in many cultures. For example, Native Americans called the Owl as a Night Eagle due to its keen vision. Furthermore, they believed that the Owl is a harbinger of truth, particularly to self, and a creature that brings magic on its wings. If we refer to Celtic mythology, it was said that owls knew the way to the underworld and were fierce defenders of truth and honor. Owl has no tolerance for deception, even when we are deceiving ourselves. The Celtic Owl was tied closely to the ancient Goddess of fertility. It was revered for its ability to see in the dark and acting as a messenger between humans and the Divine.

What does it give us? Now we understand that the owl symbolizes not only wisdom but also is a Totem Animal that opens the doorway to seeing the spiritual beings inside the human bodies that house them. With Owl energy surrounding your soul you can look into the past, present, and future with uncanny accuracy.

If you get interested in Long-Eared Owl coin, follow the link below for more details or for buying this wonderful 2 oz silver coin!

We are glad to present you Mint XXI Summer Launch Catalogue 2021. It contains silver collectible coins of different designs, diameters, and weights. Every coin is unique in its own way because while creating it, the artists of Mint XXI used various special features, including gilding, digital printing, high relief, special finish, and selective gilding. […]

“The Divine Comedy” (original name – “‎La Divina Commedia”) is a long narrative poem written in Italian in approximately 1320 by a famous poet, writer and philosopher Dante Alighieri. One of the first English translators of “The Divine Comedy” was Henry Francis Cary in 1814. Probably, there is no person on the globe who has […]