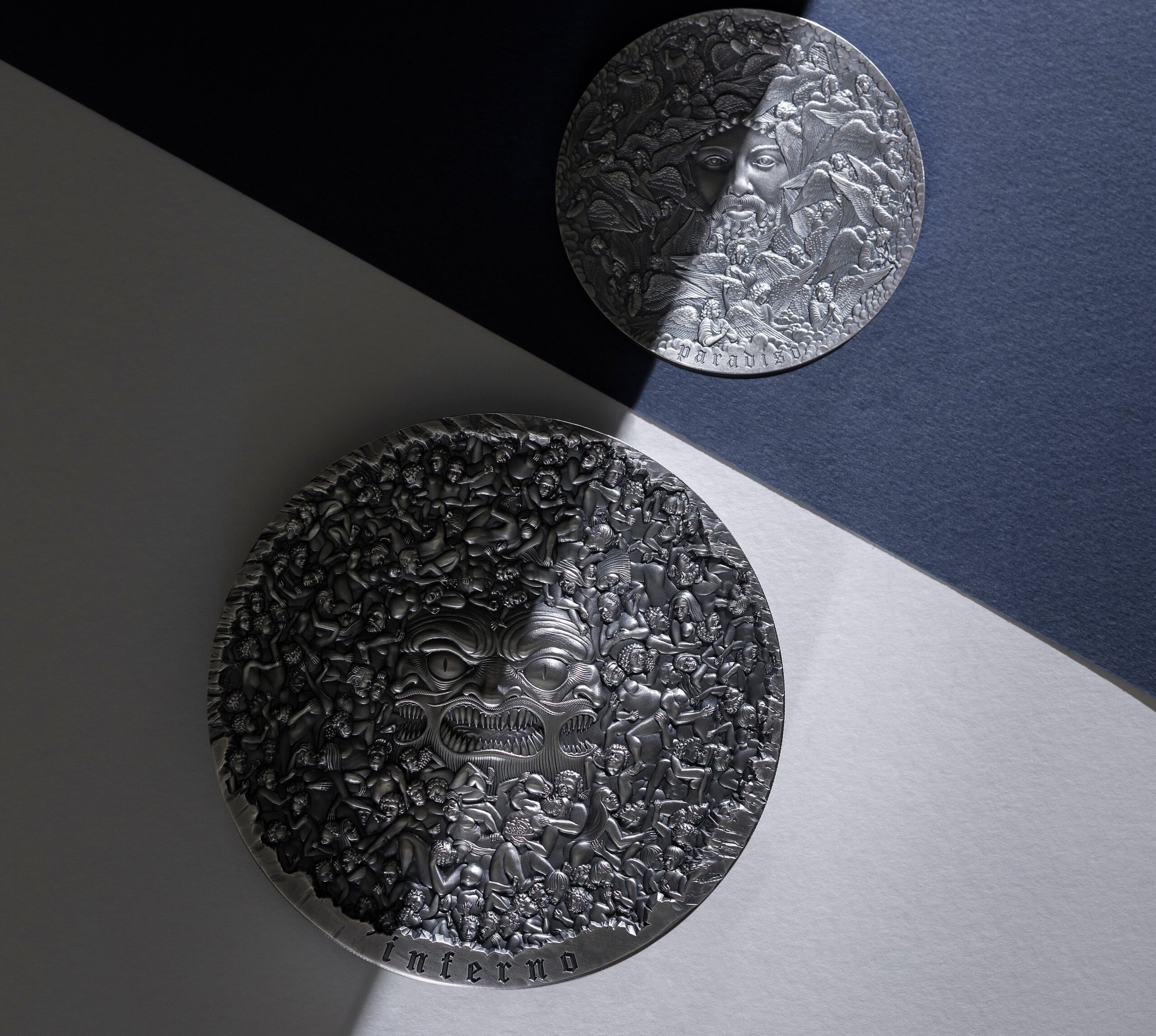 “The Divine Comedy” (original name – “‎La Divina Commedia”) is a long narrative poem written in Italian in approximately 1320 by a famous poet, writer and philosopher Dante Alighieri. One of the first English translators of “The Divine Comedy” was Henry Francis Cary in 1814.

Probably, there is no person on the globe who has never heard about this poem. “The Divine Comedy” is one of the world’s greatest works of literature. It is divided into three major sections – Inferno, Purgatorio, and Paradiso. They represent the narrative traces of Dante’s journey from darkness and error to the revelation of the divine light, culminating in the Beatific Vision of God.

These epic coins were created by Mint XXI being inspired by this world’s treasure. The first coin “Inferno” was issued in honour of the anniversary of it. In 2020, we marked 700 years from the time when Dante wrote his epic work “The Divine Comedy”. An interesting fact – he completed it a year before his death in 1321. And this circumstance was also considered by the artists of Mint XXI. The next two coins – “Inferno 1 Kilo” and “Paradiso” – were issued in 2021 to commemorate the 700th anniversary of Dante’s death.

Let’s come back to the design of the coins. Beautifully detailed, on the coins, there is an incredibly dynamic depiction of Hell and Paradise. Inferno reveals the journey of Dante through Hell. During that time, his guide was the ancient Roman poet Virgil. In this part, we may see an allegory – “The Divine Comedy” represents the journey of the soul toward God, with Inferno describing the recognition and rejection of sin.

The artist of the coins “The Divine Comedy” is a famous and greatly talented painter. He created these coins in a high-relief manner paying attention even to petty details in order to get a successful and complete artistic product.

His conception lies in depicting a portrait of Dante on the obverse of both coins and hell and paradise on the reverse of each accordingly. He illustrates Dante and at the same time the main ideas of “The Divine Comedy” – the problems of existence. It is always important to remember that we are all living being and it depends only on us where we will find ourselves after death: in Hell or Paradise.

We are glad to present you Mint XXI Summer Launch Catalogue 2021. It contains silver collectible coins of different designs, diameters, and weights. Every coin is unique in its own way because while creating it, the artists of Mint XXI used various special features, including gilding, digital printing, high relief, special finish, and selective gilding. […]

Long-Eared Owl – The First Coin in a New Wildlife in the Moonlight Series!

Let us introduce you to a new coin of our production – Long-Eared Owl. This coin is the first one in the series that is called «Wildlife in the Moonlight». It is notable for its impressive ultra-high relief, but we’ll talk about it later. First, a little bit of information about the owl. Long-Eared Owl […]